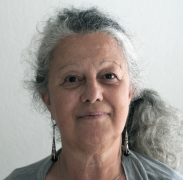 The ability to simultaneously record the activity from tens to hundreds to thousands of neurons has allowed us to analyze the computational role of population activity as opposed to single neuron activity. Recent work on a variety of cortical areas suggests that neural function may be built on the activation of population-wide activity patterns, the neural modes, rather than on the independent modulation of individual neural activity. These neural modes, the dominant covariation patterns within the neural population, define a low dimensional neural manifold that captures most of the variance in the recorded neural activity. We refer to the time-dependent activation of the neural modes as their latent dynamics and argue that latent cortical dynamics within the manifold are the fundamental and stable building blocks of neural population activity.